Cooper Savage had to accept the runner up tropy in a close encounter in 17/U boys. Alison Triggs dominated to win the 15/U girls with Chloe Whittaker taking out the 13/U girls. Jaidyn Dickie good form continues winning the 15/U boys with Will Townsend taking out runner up. Brady Clifford would not have been happy with his runner up trophy after beating the eventual winner on his sheet. Ben Mahlknecht was second best on his sheet with runner up, bur continues to impress with his hard work. Well done to the trophy winners but more importantly to the other Griffith Juniors who did not win a tophy but competed hard all day. Fantastic effort. 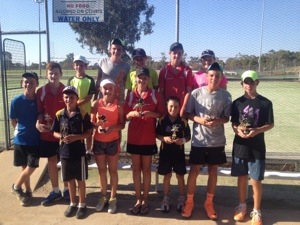